The H.P. Lovecraft Wiki
Register
Don't have an account?
Sign In
in: Articles including information from the "Lovecraft Circle" Myth Cycles, Characters, Outer Gods,
and 5 more
English

All of Time and Space

"The Case of Charles Dexter Ward"

Yog-Sothoth is a cosmic entity and Outer God. Born of the Nameless Mist, he is the progenitor of Cthulhu, Hastur the Unspeakable and the ancestor of the Voormi. He is also the father of Wilbur Whateley.

Like many Lovecraftian gods, Yog-Sothoth has many different appearances throughout the various stories of the mythos, by various authors. However, there seems to be a common agreement that Yog-Sothoth visually manifests as a mass of glowing orbs, with eyes or tendrils in some versions, and in others simply the orbs. It is heavily implied, if not outright stated, that Yog-Sothoth is omniscient, and is locked outside the universe, meaning he can know and see all of space-time all at once, which means there is no secret hidden from Yog-Sothoth.

Yog-Sothoth's name was first mentioned in HPL: The Case of Charles Dexter Ward. He goes on to be the driving force of HPL: "The Dunwich Horror," in which he fathers twin children with a human.

He is composed of iridescent globes (HPL: "The Horror in the Museum", AWD: "The Lurker at the Threshold") of which there are thirteen (EXP: Hay Necronomicon):

Yog-Sothoth is called upon from time to time to assist mortals in performing occult deeds or rituals. The most notable instances of these events are recorded in "The Case of Charles Dexter Ward" and "The Dunwich Horror."

One ritual involving Yog-Sothoth makes use of the "essential salts" of a deceased individual to resurrect them from the dead. The incantations involved with this are transcribed approximately as follows:

The incantation to put down the resurrected individual is the partial syllabic reverse of the first, and reads:

In one case involving the town of Dunwich, Yog-Sothoth is known to have been summoned for the purposes of impregnating a human female, who then gave birth to two partially-human children. The summoner was the husband/"father" of the Whateley family, who was known to have stood on a hill in a circle of stones with the Necronomicon while shouting the name of Yog-Sothoth from the summit.

Appearances in other fiction

Yog-Sothoth, also called the Great Intelligence, appears in Doctor Who as the military strategist of the Great Old Ones, who were the equivalent of the Time Lords in a previous universe. Escaping to the Doctor's Universe Yog-Sothoth discovered it had gained god-like powers and decided to play out the various gambits and games it had only been able to simulate before. Over the millennia, it mounted millions of campaigns against inhabited planets using conquered races to bolster its forces. However, the Intelligence is deliberately malign and petty; a stark contrast to the alien and incomprehensible mind of Yog-Sothoth (and indeed, most depictions of any Lovecraftian deities excepting Nyarlathotep period). (ADJ: Millennial Rites)

As the globes behind the green pentagram (cf. Kenneth Grant) 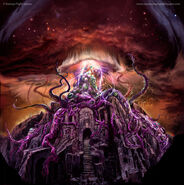 Yog-Sothoth, aka The Great Intelligence (Doctor Who) 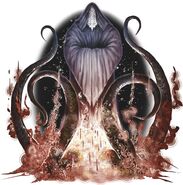