The H.P. Lovecraft Wiki
Register
Don't have an account?
Sign In
Advertisement
in: Articles including information from the Mythos Influenced Works, Species Originating From Mythos-Inspired Works, Sapient Species, Extraterrestrial Species

Starcraft
🐙 The Zerg (aka, The Swarm) are a ravenous spacefaring race and cosmic horror element in the fictional universe of the Starcraft video game.

The Zerg are a terrifyingly ruthless race of arthropoidal aliens who are constantly mutating and evolving. They evolve a million times faster than humans do.

Native to the Milky Way galaxy, they were discovered by the Xel'nagaaga close to the galactic core. The Xel'Naga conducted experiments on the least significant life form on that world, a species of miniature insectoids, small and worm-like. Due to the genetic manipulations done by the Xel'Naga, they adapted to burrow into the flesh of other species and feed on them, and later evolved to parasitically merge with their hosts and control them. Within a short time, it gave rise to a ravenously united race.

The oldest, most evolved, and most psionically powerful of the Zerg is the Overmind, an incomprehensible alien intelligence. It is a massive super-evolved brain-like entity that controls all of the Zerg. Within the Overmind, it contains the entire collective intelligence of the Zerg. Its programming along with that of the rest of the Zerg was corrupted by Amon, the rogue Xel'naga, turning the Zerg into a cosmic threat, consuming worlds and species as it spreads across the stars. The Overmind knows it is being manipulated and is desperate to free the Zerg from Amon. It found the weapon that would free the Zerg from Amon in a psionically powerful human female, Sarah Kerrigan who would not only liberate the Zerg from Amon's control but would play a decisive role in his final defeat. 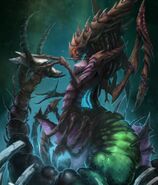 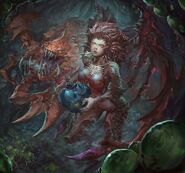